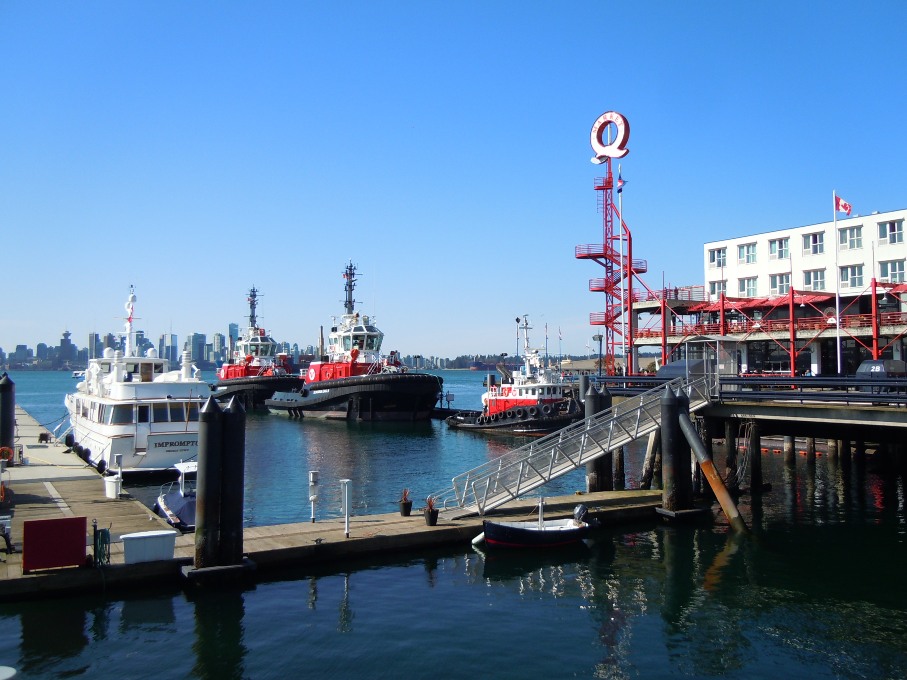 through outdoor activities or the many programs and services offered by the North Vancouver Recreation Commission. While offering hundreds of ways for people of all ages, incomes and abilities to get involved,the commission provides dedicated information for newcomers about its programs and services in five languages: English, Farsi, Korean, Mandarin and Tagalog.

Getting to and from North Van is an easy 12-minute commute by SeaBus water taxi from Vancouver. The SeaBus terminal at Lonsdale Quay is a hub for the Vancouver area’s extensive bus network. By car, North Vancouver offers quick access to the city via the Highway 1 and either the Second Narrows or the Lions Gate bridge.

North Van offers a wealth of amenities, from the shops of Lonsdale Avenue to the freshest of seafood and produce available seven days a week at the Lonsdale Quay Market.

Many people choose North Vancouver for the outdoor lifestyle. Locally, Grouse Mountain and Mt. Seymour together enable many different activities, with a 10-kilometre forest pathway for biking, walking, running and rollerblading and an intense climb known as the Grouse Grind, a 2.9-kilometre ascent up the mountain’s face along a rugged path. Other local attractions include the Capilano Suspension Bridge and the Capilano Salmon Hatchery. Those looking for something more educational or cultural can take courses at nearby Capilano University or catch concerts and plays at the university’s Performing Arts Theatre.

Deep Cove refers to both the community in the easternmost part of the District of North Vancouver, in British Columbia, Canada, and also the geographic name of the small bay beside the town. It is affectionately referred to as "The Cove" by local residents. Located at the foot of Mount Seymour, Deep Cove faces due east, fronting on to Indian Arm, a branch of the Burrard Inlet. Deep Cove is 13 kilometers (8 miles) from downtown Vancouver. While Deep Cove itself is not a new area, a lot of the homes lining its streets are. Other, expanded and restored homes, dating back 30 or 40 years, add character and charm. A select few homes on the waterfront, offer their own private moorage.

Deep Cove became a popular summer resort for Vancouver residents in the 1910s, with cabins, logging and granite quarrying featuring in the local history. For many years, the focal point of the community included a yacht club, dance hall and general store.

The population slowly grew in the 1960s and 1970s, when access to the area improved following the completion of the Second Narrows Bridge to Vancouver in 1960. However, Deep Cove held on to its rural feel, and a large, open horse paddock sat adjacent to Gallant Avenue in this period. Today, the Cove remains a popular attraction in the district, drawing visitors from neighbouring Cove Cliff, Dollarton, Parkgate, Indian Arm and Woodlands areas.

With its proximity to forests, mountains, skiing, parks and the water, Deep Cove is well known among outdoor recreation enthusiasts. The Deep Cove Bike Shop, a local institution, brought the first mountain bikes to Vancouver in the early 1980s.

Deep Cove is a popular small boat centre, with a Rowing Club, Canoe and kayak rentals and lessons, and a marina. The bay in front of the community is one of the few in Indian Arm which has both a sheltering shape and the shallow bottom required for overnight anchorage of pleasure vessels.

For simple shopping pleasure, Deep Cove's Gallant Avenue is ideal. On Deep Cove Road is the Raven Pub, enjoyed by the locals particularly for its pizzas. For more traditional shopping, the area is served by two shopping centres. Dollar Shopping Centre provides a Food Store and a liquor store along with many small shops and a bank. Located by the side of Dollarton Highway, it is a short drive from Deep Cove. Heading west up the Mount Seymour Parkway from Dollarton Highway, you quickly come to the Parkgate Village Shopping Centre which offers a large food store (Safeway), and a number of small stores and services including the Lazy Bay Cafe, well known to be a local gathering place.

The Baden-Powell Trail leading up to the lookout point, Quarry Rock, is a popular spot for visitors, especially in the summer. The Community Centre boasts an art gallery, stage, and archive.

Lower Lonsdale continues to be an exciting hub of activity as the City works to build a sustainable community for all those living and working in what will be one of Greater Vancouver's best neighbourhoods. Lower Lonsdale is part of the original North Vancouver town site, bordered on the north by Keith Road and on the south by the waters of the Burrard Inlet. It is the only part of North Vancouver that has very easy access to Downtown because of the Seabus (ferries that go back and forth between the heart of Downtown and North Vancouver all day).

The City is working to meet residential and commercial demands in the area. Phase 2 of the Pinnacle development south of East Esplanade is near completion, including significant new areas for the public.

While a few “character” homes remain, the vast majority have been replaced by apartments and townhouse developments. Some of the newer construction offers fantastic views of Burrard Inlet and Downtown Vancouver. In 1997, City Council approved a development plan for a portion of Lower Lonsdale known as the Lower Lonsdale Planning Study Area (LLPSA). The LLPSA development plan addressed site assembly, building heights, site planning, open spaces, pedestrian linkages, traffic and amenities, as well as enhanced streetscapes, view corridors, and attractive skylines. These considerations are now a significant component of the City of North Vancouver's Official Community Plan, and have shaped the recent developments in the area.

Lower Lonsdale now consists mainly of multi-family or commercial/retail properties. It is full of apartments and thus houses many of the young people of the City of North Vancouver. Its real estate offers both some of the most reasonable prices on the North Shore and some of the most expensive, particularly for new apartments.

Lower Lonsdale continues to add exciting new inventory of residential and commercial developments, as well as shops, restaurants, galleries and museums. Amenities such as the John Braithwaite Community Centre, the City's first multi-purpose facility offering more than 35,000 sq. ft. or social, recreation and general community use space, and public open space such as Jack Loucks Court, have made Lower Lonsdale one of the most sought-after neighbourhoods in the Greater Vancouver area in which to live and work. Lonsdale is served by two community schools, Ridgeway Elementary, Queen Mary Elementary, Carson Graham Secondary and Sutherland Secondary School.

Relax and enjoy Vancouver's best view from the North Shore's waterfront market & shops! With over 80 specialty shops and services, Lonsdale Quay Market and Shops is the premier destination at the gateway to the North Shore. Featuring a fresh food market with local products, an international food court, specialty shops featuring local designers, kid’s shops & play area, restaurants & a boutique hotel and spa, your visit at the market is sure to be an unforgettable experience!

Lynn Valley is named for John Linn one of the pioneers of this part of the North Shore. Bordered to the east by Lynn Canyon Park, to the north by Lynn Headwaters Regional Park and the Greater Vancouver Regional District Watershed, the Lynn Valley area is wide-spread but limited in its expansion. Two main roads bisect the area: Lynn Valley Road and Mountain Highway.

Most of the residential development in Lynn Valley took place from the late fifties through the seventies, though one can find a few homes from the early part of the 20th century. Nowadays, most new construction is either “in-fill” or re-development. Most homes in Lynn Valley are traditional family homes with fairly generous lots. There is also, at times, a mixture of lot sizes within a single block area. Some townhouse complexes and apartments are also available. Recently, there has been quite a bit of building going on in the heart of Lynn Valley, in an area called Lynn Valley Centre. This has added a substantial number of new apartments along with some townhomes to the stock offered by Lynn Valley

The proximity of many parks, nature in general and numerous activities is a major attraction for the majority of Lynn Valley residents.

Lynn Valley is an area with more schools than any other on the North Shore, reflecting the preponderance of single family homes that make up its fabric. Five public schools from elementary to high school and one private school serve the inhabitants.

At the heart of Lynn Valley is Lynn Valley Centre, which offers a large food store, a department store, a liquor store and numerous other small boutiques, banks and other services. The Centre, being newly renovated, has created a re-birth for the Lynn Valley core offering services such as yoga, florists, retail and fine foods. The Black Bear Pub was added a few years ago and is worth the visit for a warm atmosphere and gourmet pub lunch. Not far to the south, is the Park and Tilford Shopping Centre - at the foot of Mountain Highway, at Brooksbank & Keith Road.

A few minutes drive to the west on Keith, takes you to Lonsdale Ave, a broad commercial avenue running north-south through North Vancouver and offering a multitude of shopping and entertainment.

Canyon Heights in North Vancouver is one of the most sought after areas in North Vancouver for estate style living. Canyon Heights is within arm’s reach of popular Edgemont Village, Grouse Mountain, and offers easy access to the upper levels highway & Vancouver. Local schools include Handsworth Senior Secondary, Highlands Elementary, and Montroyal Elementary. Canyon Heights is a large, totally residential, treed and varied sub-area. It offers everything from a 2000 sq.ft., newish home on a 33' lot to 5000 sq.ft. mini-estates on 1/3 acre of land. This area has a fairly high land value, so entry level homes are rare. Most homes are 40 years or younger, with the vast majority being 1950’s bungalows that have been remodeled. There are also a handful of townhomes at Montroyal Village.

It is bounded by the Capilano River to the West, the expensive homes and fantastic city views of Malaspina Heights to the North, Mosquito Creek's natural beauty to the East and the rarely available homes of Sunset Gardens to the South. Some of the most expensive homes of North Vancouver are in Canyon Heights.

South on Capilano Road takes you to the Upper Levels Highway (Trans-Canada Highway 1) and west on the Upper Levels takes you to West Vancouver's Park Royal Shopping Centre. Heading further down Capilano Road brings you to Marine Drive, a main east-west commercial artery on the North Shore. Driving southeast, you reach Westview, where a shopping centre including a large food store, a liquor store and other shops can serve you. To the east, Edgemont Village, awaits.

Recreation abounds: Grouse Mountain Ski Resort is five minutes up the hill, and Capilano River Regional Park is steps to the west. The beach? Easy! Down Capilano Road, turn right at Marine Drive and turn south on 13th Street in West Vancouver. Ambleside Beach is at your feet. Finally, you can try Para-Sailing, landing in the field near Grouse Woods.